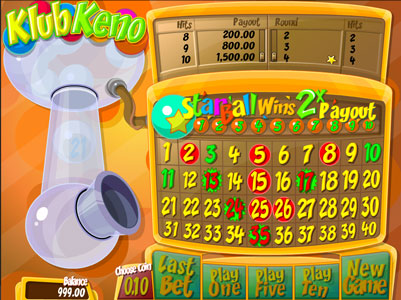 Keno games are a lottery on a small scale typically with better odds than most other lotteries. A typical Keno game involves 80 numbers of which the players pick from 1 though 10, 12, 15 or 20 numbers depending on the game. The name "keno' has French roots in the word "quine" which translates into five winning number. The game itself has its roots in Ancient China in a city during a great siege, and later helped raise funds for various projects like the great wall. The first western record of the lottery game under the name keno was in 1866 in Houston Texas. Keno is particularilly popular in Canada with Quebec in casino Montreal, BC wilth the bclc has games daily and Ontario's Daily Keno draws huge followings.

Payouts in Keno usually start at 4 numbers and the odds of hitting that is 1:4.877, or about 20% of the time. Now it gets funny, the game will actually hit 5 numbers with odds of 1:4.287 or 23% of the time or more frequently, thats remarkable that you are actually more likely to have 5 winning numbers than 4. At 5 numbers though the chances of winning hits its apex and for 6 numbers its 1:5.258 or 19%, it drops even more till at 10 numbers its 1:253.801 or 0.39%. At 20 numbers the odds are so remote that it seems that it will never happen at 1:3.5 Quintillion. Players get paid though for not all the numbers but usually starting at zero hits paying 100:1 because of its rarity, then 2 and 3 before jumping to numbers 7 and higher.

Lottery players often like to play keno & slots together online many online casinos and mobile casinos have both games available for real money. Keno can be played in stand alone fashion with an electronic games or with a larger player pool. Besides Keno - casino slot games are hugely popular online for real money along with bingo online. The most popular slots for lottery players are: Cashino, Cash Spin, Cash Wizard, Quick Hit Platinum, Starburst, and Wheel of Fortune.

Keno is often offered for real money amongst local lotteries as an add on or stand alone game to play. Real money keno games online are found at most casinos for desktop and mobile devices. Deposit options for the games that are most popular: Paypal, VISA, Ukash, Skrill and Neteller. High stakes keno games involve larger buy in amounts per card and proportionately pay you out more, the big name online casinos have the highest stakes and most popular games.

Online Keno games are available to play for free or real money at the best online casino, bet365. Play for real money being well assured that the games a are fair, the casino is licensed and 100% safe and secure with a long standing reputation of excellence in casino gaming and immediate support for any problems that may require assistance. Play Keno online plus casino games including over 250 of the best online slots ever.