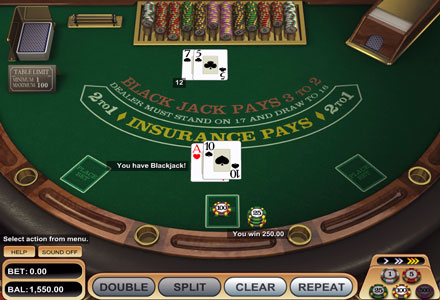 Blackjack casino games are arguable the most popular casino table game in the world. The game is a card game of unknown French or Spanish origin that is first noted in Don Quixote, written in 1601 and called "Rinconette y Cortadillo" about a couple of card cheats. Often called "21" or Blackjack 21 the game was originally called 21 however that changed when the game came to the United States. To help promote the game in gaming houses in the US there were a number of bonuses offered to the players, one bonus was that if you got an ace of spades with a black Jack your would receive a payout that was ten times your wager, thus the games name "blackjack".

The game is played in which a player tries to beat the dealers hand in trying to get as close to 21 as possible without going over. The basic requirement is to have a hand that is higher than the dealers hand without busting (going over 21).This can be done in as little as two cards by getting an ace and a face card or "blackjack" without the dealer getting a blackjack or by using more than two cards and up to 5. After you have two cards you have the chance to "hit" or take and other card to make a better hand. When no more cards are required you "stand". During the game you may also have the chance to split your cards if they are the same number, Double down by doubling your bet after receiving one more card face down, surrender after the house checks for blackjack, in this case you give up half the bet. Finally you can buy insurance if the dealers upcard is an ace, this may be a good or poor measure depending on the statistical relation of the cards. Aces are seen to have the value of either one or 11, whichever is more favorable. The dealer will play against the other players at the table and represents the house hand in the dealer position holds the house edge which is usually less than one percent. The dealer is often regulated by the house rules but will stand on 17 and hit on 16.

Variations of the game rules that may change the odds include the number of decks, early or late surrender, dealer hits on soft 17, re-splitting, dealer wins ties, no double after split, double only on certain cards, and a no hole card rule. If dealer wins ties instead of a push, the odds are changed drastically out of favor of the player. The number of decks may change from a single deck to 6 or even 8 decks in many big casinos. Single deck blackjack offers the best odds to the player with a house edge of only 0.17%. 8 deck games offer a house edge of 0.65%, worse but no nearly so bad as other games like slots.

Blackjack 21 has several close games that are long standing and new invented variations. Spanish 21 has softer rules such as doubling on any two cards and with payout bonuses for 5 card 21. Blackjack switch is played with two hands and allows the player to switch cards between the hands to make a better hand. Some more variations are: 21st century Blackjack, BJ Pro, Double Exposure, Multiple Action and super fun 21.

Card counting is a legal and effective way for a player to gain an edge on the house in casino blackjack made famous by the MIT Blackjack Team in 1979 lead by professor J.P. Massar. In card counting a value of 1 is set for cards from 2-6, zero for 7-9 and -1 for cards ten through ace. Tracking cards though the game play will lead to either a high, low or neutral count. A high count will mean that there are lots of aces and faces left in the deck which represents positive expected value for the player and they should bet more. A low count represents a surplus of low cards in the deck and the player should bet less. A neutral count means their is no advantage or disadvantage and should wager normal. Card counting has a larger advantage the fewer the number of decks so single deck is seen as most advantageous. Two more ways to get and edge on the house without cheating are shuffle tracking and hole carding. an advanced player may also read the behaviors of other players and especially the dealer to see what their hole cards may be.

Play casino blackjack online for free or real money with computer based blackjack games that are fair (have certified complaint random number generators) with single and multi deck games. You can play free games or real money and even tournaments on your favorite home computer or mobile device. Windows PC and Apple Mac computers have both casino downloads and no download blackjack games available. Free games can also be played on social casinos like Facebook's Double Down Casino by IGT. Mobile casino blackjack for iPhone, iPad and Android has all the same great features of the online games in the palm of your hand through blackjack apps at the App Store and Google Play Store.

Play real live blackjack at the online casino with a vivacious live dealer to play for real money with other players with the ability to interact with a real person instead of just a computer screen. Live dealer games can be for higher stakes and with cards dealt out in front of you by a real person are certainly fair. The entertainment value of these games and the beautiful dealers is certainly the closest thing you can get to visiting a real land based casino from the comfort of the deck of your house.

Blackjack for real money is one of the most fun games you can play in an online casino. Its fast to sign up and deposits can be made nearly instantly with a variety of payment methods like VISA, Master Card, Paypal, Ukash, Instadebit, Neteller, Skrill and many more. Choose the stakes that you want to play at from low stakes in video blackjack games to the high stakes live dealers.

Live dealer blackjack games offer the highest stakes outside of a large casino in Vegas with glamorous professional dealers in a real casino setting. High stakes blackjack for real money varies by online casino in as to what are the highest stakes allowed of course the limit will depend on you in part and how well you are known there. If you would like stakes higher than the posted limit put in a request and it may often be accepted. VIP passes and rewards offer special offers not available to the general public and special attendants will be assigned to you to make sure that you have a most enjoyable experience playing high limit casino blackjack.

The best online casino to play blackjack online for real money depends on the country that you are living in. In the United States, Slots.LV has some great blackjack games for American players and a ton of other casino games and casino slots as well. The rest of the world would find that the top blackjack casino online would be bet365 with both online blackjack and live dealer games to boot. Both online casinos offer games for desktop and mobile devices so you will have the opportunity to play where you want plus receive a large bonus just for signing up.

100% Safe and Secure with Fast Payouts